HEAD: To figure out your UA fitted hat size, measure the circumference of your head where your hat will rest. If you don't have a tape measure, use a string and measure it against a ruler. Find your measurement on the size chart to determine your ideal UA hat size. 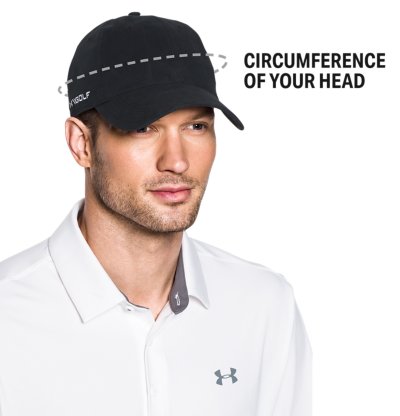 sorry the adress is Hilapellontie 2d-a7, can you send it to right address?

Perfect fit! The front of the hat is reinforced so the logo is showing! I have used this hat most of the summer and the iso chill band really gave me a break from the heat. It’s gotten dirty and I just washed it in the sink with some tide and back to new! I see this hat lasting years!

I first bought this hat as a L/XL and after about a day, realized it was actually waaay too tight, so I returned it and went for the XL/XXL. At first it feels nice, but again, after about a day I notice it's actually WAY too big, and I have a very large head. It comes down too low, so much that it's essentially riding on the tops of my ears. Very annoying. It's also called the "iso chill" which lead me to assume that it would keep me cool. It did NOT. Quite the contrary actually. Maybe it was because the hat was so big it was covering more surface area on my head, thus trapping more heat, or if it just can't stand toe-to-toe with the Texas summer...but it definitely didn't "chill" as advertised. Going to have to return and find another option. Very disapointing.

I wear size 7 3/4 fitted hat. I bought this hat in size L/XL and it fits perfect.

I normally wear a size Large in most fitted hats. I ordered the L/XL size. The fit was too tight, left hard marks on my forehead, and was painful after only wearing for 10 mins.