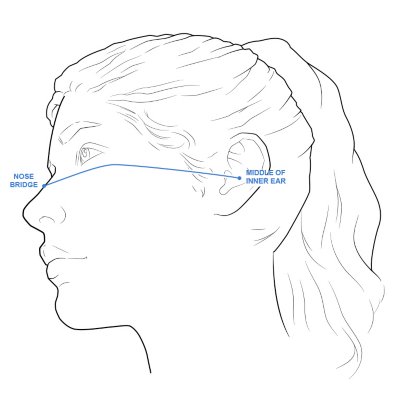 When health officials said healthy people should wear face masks, we started building prototypes until we made the perfect one for athletes. It's got the airflow you need, a cool feel, and the best fit for running or training.

Use a flexible measuring tape to measure from the bridge of the nose,
across the cheekbone, and then right past the ear canal.
Find the closest measurement in Table A.

Everyone’s face is a little different, so check out the Mask dimensions (Table B)
to make sure you know what the ultimate height and width are.

I suffer from asthma. All the masks I have tried have been awful. I couldn't breath they made me feel anxious I ended up having a asthma attack one time I wore one. I thought I would give this mask a go, and it's perfect I can breath with no problems. I like it so much I have ordered another one and two for my husband. If you suffer with asthma or anxiety of the thought of wearing a mask. This is the mask is definitely for you

Fit: I measured my face as described in the page and it worked like a charm. I didn't have any issues with that. Bear the mind your chin as you've to consider it when measuring so there is a good grip. Comfort: Best I've tried. Nonetheless, when doing sports, the straps around your ear are not the best experience. Something for the neck might be more suitable. I bought some "neck straps" to adjust it as well. It also doesn't grip properly in your face when running or moving much, so you constantly have to adjust it and it might block your nose a bit. I expected something better in that aspect. It is not bad if you're going to the gym or something like that but running/football for example, it becomes cumbersome. I've also bought some brackets to see if the helps in that aspect. Performance: Well, it is a mask so you will have some performance drawbacks but I would say that once you get used to it, it is really good. If it gets wet, it becomes hard to breathe so pay attention to it as well. Also mind that its weight might "block" your nose a bit so try it and adjust as needed. The metal part on top is not the best so it looses the modeling after a while. All in all I recommend the mask. Nonetheless I expected some details to be better. I mentioned above: the straps around your ears, how it "attaches" to your face, the metal that models your nose (mine broke and I had to replace for example). The cloth is really good and it doesn't hurt you when wearing for long periods.

Based on the original misleading product description, I thought it can prevent COVID-19, but after I received the products and would like to recomend to my friends, I found the description somehow changed. I ubderstand it is not preventing COVID-19. I was already exposed to gym with this mask and restarted my subscription to gym. I want to discontinue it now but has to pay extra month before stop. I want to return the one unused mask! How do I claim my losses?! Pls be for professional for your clients!

The UA Sports Mask works really well for me for everyday use during this COVID 19 period. Metal band at the top to adjust to your nose and curves of your face. Overall worth the money.

Expensive but worth it mask upgrade

Mask looks good, super comfortable and allows me to breathe easily. Given that we will all be wearing masks for some time this was a great investment.