FOOT: We start with the true foot, which means we measure from heel to toe. That measurement (in centimeters) is then translated into our standard sizes.

To find your foot measurement closely trace your entire foot onto a piece of paper and measure from heel to toe. If your measurement is between chart numbers, we recommend sizing up. Be sure you’re putting your full weight on your foot while tracing. Please note: for the best results, measuring later in the day is recommended.

We created this easy-to-use sizing chart so that finding the right size shoes for your kids won’t be a workout in itself. *Due to the metric/imperial conversions, there will be some instances where two US sizes will equal one UK size or one CM size. 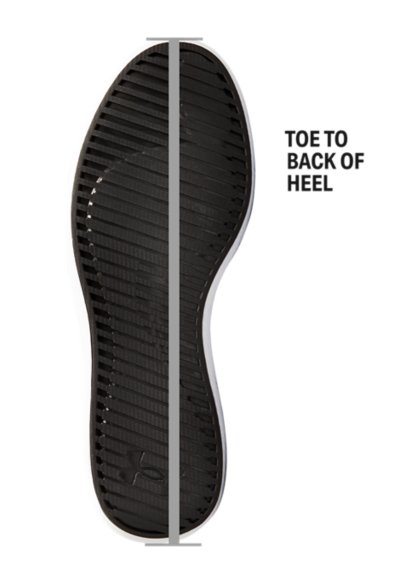 It gives you the speed of a Pebax® propulsion plate and the soft, energy return of UA HOVR™—but this shoe is also your personal running coach. Connect your shoes to UA MapMyRun™ to track your stride length, cadence and pace and then guides you in real-time. Running just got a little bit easier.

Shoes have great comfort and bounce when running, they fit well and would definitely buy again, maybe in a darker colour as the white have got quite dirty.

Comfy and good for long distance

I bought these a few weeks ago for long distance running and they’ve been great so far! I got 1/2 a size bigger than normal because I wear quite thick sports socks when I run. They’re comfortable and light, would definitely recommend them for medium to long distance running.

Took the plunge and ordered these shoes and I’m so glad I did. After reading the other reviews I bought half a size up to be on the safe side. If you have wider feet then you would need to size up. That being said, they fit well. Your foot feels very secure in the shoe and they’re unbelievably comfortable. The Bluetooth connection to the app is an added bonus and the app offers useful coaching tips to help improve your technique and make you a better runner. I will definitely be recommending these shoes to others, hands down the best purchase I’ve ever made!

Nice, but not for over-pronators

Shoe had nice footbed, comfortable, but not for this over-pronator, not enough arch

most comfortable shoes I own. I am hooked. On my feet all day working in physical therapy. Love love this shoe. Fors perfect. Walking on air. Amazing workout shoe as well

The most painful shoe I've ever worn.

First off, I don't actually think these shoes are USUALLY deserving of the 1* rating I'm giving, but in my case, they are. I'll be as descriptive as possible so potential buyers can be aware of what to look out for, I think it's possible I got a bad pair of a good shoe. *cries* At first they seemed great, felt comfortable and had great features but I quickly came to learn that they were only a nuisance. I very quickly started getting blisters on the inner arches of my feet caused by the insoles actually rubbing through my socks, the blisters would tend to be around 1-2 inches long (more than a month later they're still not healed haha) The cadence feature in the shoe/app is wrong, the shoe/app is telling me to run at comically high cadences giving me the appearnlance of the Tazmanian devil spinning his feet. They seem to aim for the mystical golden 180 spm figure for everyone... 180 spm is only an average among professional runners, all of whom are lightweight bread for purpose runners... I am a heavier, bigger built person who gets far better results and less pain/wear from running at a lower cadence of 160-170. That fact that this isn't customisable is surprising. The pain... My god the pain! I can't be sure what it's from but every time I run in these shoes I get excruciating shooting pains in the outsides of my feet, I believe it's where the propulsion plate ends and causes excessive and unnecessary pressure on part of my foot that should not be bending (these shoes were fitted and selected by an UA employee in an UA store in Riyadh) and if I don't stop my run early enough I'll have a limp for a couple of days and won't be able to run. My nice expensive Machinas have now need relegated to the back of the shoe rack and I've gone back to my VERY old back up shoes.